"BACK TO HER ROOTS"

"Back to Her Roots" 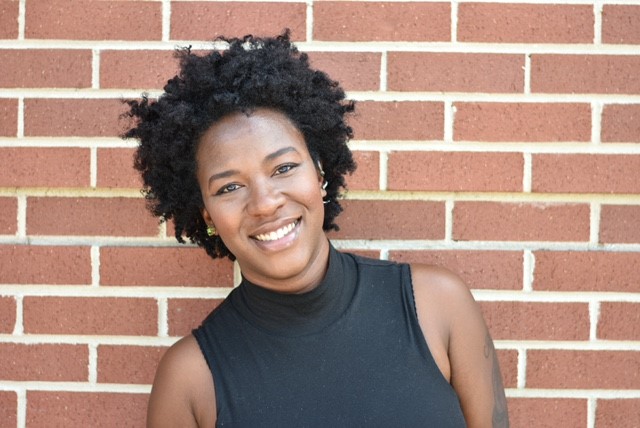 Life is hectic for the mother of three, hairdresser, doula, and new entrepreneur. At the beginning of our call, she warns of the video connection, “I hope it doesn’t glitch too much. I have three kids that are all in class right now. We’re all on Zoom!” Her eldest is a teenager in college studying to become a psychologist and the other two are in elementary school. The younger girls pop in to say hello and to see what Mom is doing. Alvina and I discuss her past, family, and her new business Root Down Cleansing.

“I never know why they call us military brats. We’re the most well-rounded people. We have to make new friends every time we move to a new state!” Alvina chuckles about her childhood. Born in Baton Rouge, Louisiana, Alvina was raised with her 3 sisters and her brother. Her father was in the military, so the family relocated often. They spent time in various states and six years in England before settling in Maryland in 1992.

As a young Black mother, doctors and nurses told Alvina what was going to happen rather than include her in the delivery process. In hindsight, Alvina realized that she was bullied by the medical staff and that she was powerless in decision-making.

She had her first child shortly after graduation. As a young Black mother, doctors and nurses told Alvina what was going to happen rather than include her in the delivery process. In hindsight, Alvina realized that she was bullied by the medical staff and that she was powerless in decision-making. Home from the hospital, Alvina followed the example she knew in raising her daughter. She fed her baby formula and jarred Gerber® food. They lived with Alvina’s mother; Alvina attended cosmetology school and worked at UPS to cover tuition. She met her husband when her daughter was two. He was also a student working at UPS.

“I left my little nest with my mom when [my daughter] was six. I started to realize the food and remedies I used, were not helpful for me or my daughter. And I started thinking, ‘Oh my gosh, what is my daughter seeing? Is the cycle going to continue?’ And I just wanted something better for me and for her.” Alvina confides. She researched school districts in her area, moved into her own apartment, and worked as a hairdresser. Leaving her mother’s home allowed Alvina to step back and examine her beliefs. She grew closer with her future husband and they shared their ideas on how to live life. Change is scary but Alvina was excited, “Once I started confronting some of those hard truths, I was able to start turning things around for my daughter. Not only was I changing it for my daughter but also for myself.”

Alvina married and became pregnant with her second daughter. This time she had more of a support system and wanted a different birthing experience in the hospital. She delivered in the hospital without drugs or intervention for a less clinical experience. For her third daughter, she chose a natural home birth.

Doulas never crossed her mind during her first pregnancy as a young Black teenager. “I didn’t feel like it was an option for girls like me,” she says.

Three births, three radically different experiences. The range of perspectives from her first birth to the third led her to become a doula, a trained professional that supports women and families through the childbirth process. She wanted to support other mothers and share her knowledge. This was a major step for Alvina and something she would not have considered when she was younger. Doulas never crossed her mind during her first pregnancy as a young Black teenager. “I didn’t feel like it was an option for girls like me,” she says. Concepts like clean eating and cooking food from scratch were foreign to her when she was young. Her life was changed for the better. 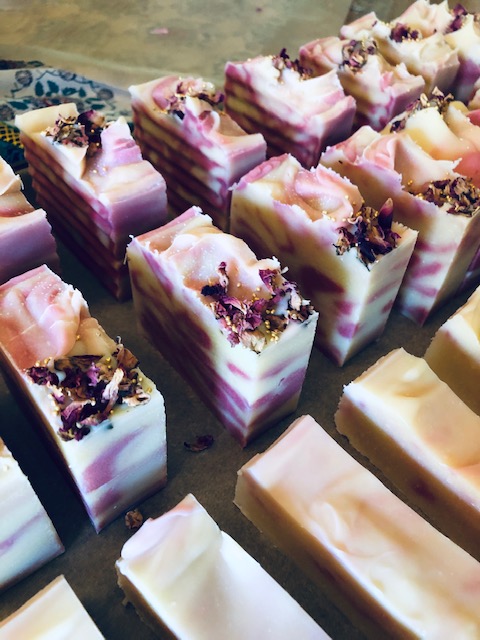 Root Down Cleansing is Alvina’s all-natural handcrafted soap and skincare business. She smiles as she explains how she started soapmaking a few years ago. Her daughter attends a Waldorf school where they set up an annual market as an interactive, educational experience. Parents donate homemade goods and the school sets up a room to look like a shop. Students receive money from their parents to buy the donated goods. Alvina made soaps with her daughters. In the beginning, they used a soap base which they melted down and decorated. Thinking about the experience she laughs, “The funny thing about it is every time I would volunteer and give them the soap to sell, my kids would always buy the soaps for us for Christmas. And I’m like ‘We’re the ones making them! Get something different!’ And every year they come back with the soaps I made.”

The soaps were a hit and sold out every year. Alvina was nursing her youngest daughter at the time and her skin broke out. She remembers, “It was the worst acne. It was like I was going through puberty all over again.” Alvina was hesitant to use the dermatologist-prescribed pills or steroid creams. She did not want medication to pass through her breastmilk. What was her skin absorbing? Making her own soap would allow complete control over her skincare. She decided to go beyond the melt and pour base and made her first soap, Charcoal Detox, from scratch. Cold process soap making involves mixing lye, water, and oils to make soap. “I remember the first time I made it, because all of this was trial and error, I thought I was going to blow up my house or something. Because once you mix the lye with the water, it gets really hot. But I made my first soap and started using it on myself. And within six weeks, I started noticing a difference. It was pretty amazing.” Following this success, she crafted a Goat Milk Soap for her daughter’s eczema and that worked well too.

Over time Alvina learned about natural remedies like essential oils. She took some herbalism courses and planted her own herb garden. She infuses oils with her homegrown herbs for Root Down Cleansing’s products. Her favorite soap is a Poppy Seed Lemon Eucalyptus Soap with lemon balm-infused almond oil. The lemon balm comes from her garden.

Being a mother touched many parts of Alvina’s journey. Much of her learning was inspired by wanting to provide a more wholesome life for her daughters. Alvina had to overcome relying on pharmaceuticals and packaged foods; her daughters are learning a different way. The name “Root Down Cleansing” has two meanings for Alvina. First, there are the roots of the herbs she infuses into her soaps and salves to heal. Second, it represents her roots and those of her customers - their lineage. She explains, “I really want to pass this ancient knowledge that was not passed down to me. I want to give that to my kids and to share that with as many people as I can.” 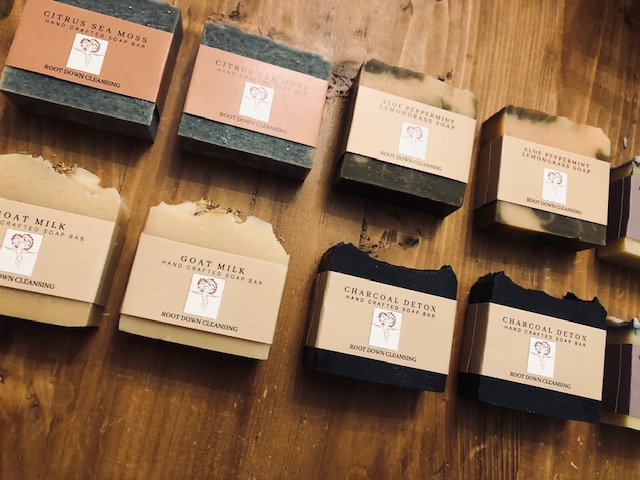 In February Alvina was signed up to sell soap at a festival, but it was canceled due to COVID-19. She had a stock of soap and decided it was time to launch her business. Alvina heard about Empowered Women International’s Entrepreneur Training for Success (ETS) course through a friend. She participated in Spring 2020. She loved the creativity of soapmaking but lacked technical entrepreneurial knowledge. Before participating she did not have a business plan, marketing strategy, or networking know-how.

“I don’t want to sound so corny, but it really was just believing in myself and not this negative dialogue that I was saying to myself.” ETS helped this dialogue shift from ‘You can’t do this, you can’t do that’ to ‘Yes you can! You did it!’ Starting a business is intimidating and ETS helped lower the barriers to entry.

Asked what the most important takeaway from ETS was, Alvina confides, “I don’t want to sound so corny, but it really was just believing in myself and not this negative dialogue that I was saying to myself.” ETS helped this dialogue shift from ‘You can’t do this, you can’t do that’ to ‘Yes you can! You did it!’ Starting a business is intimidating and ETS helped lower the barriers to entry.

Root Down Cleansing is the culmination of Alvina reconnecting with her roots. Alvina’s family is from North Carolina. Her grandmother owns forty acres on the land where her ancestors were enslaved. Alvina was disconnected from her family growing up but now she loves to visit. Her daughters can listen to their great-grandmother tell stories and see their family cemetery. On these visits, Alvina learns about the home remedies that her ancestors used but lost over time. Her own great-grandmother gathered plants from outside to make remedies. When Alvina asked what these plants were, her mother replied, “Something green.” Alvina is collecting the stories and creating a book as a remembrance for her daughters so they can know the past without the hurdles she faced.

Alvina wants to continue to develop products that are safe and effective for the whole family. She recently opened an Etsy shop to sell her soaps to a wider market and buyers can review Root Down Cleansing’s products. Prospective customers can read these reviews and they help Alvina receive valuable feedback for her growing business.

Root Down Cleansing products will also soon be stocked at Shop Made in DC's Georgetown location.