Christopher Kim has been living in Park Marconi since 2015. However, in 2021, tenants of Park Marconi were handed a notice that a new developer would be purchasing the building. Despite DC tenant protections allowing tenants to stay in their homes, many tenants understood that they would soon have to move out.

Located in the Mount Pleasant neighborhood of Washington, DC, on 16th St just south of Lamont St, Park Marconi is a five-story brick apartment building built-in 1936. Families from Central and South America, the Caribbean, and the US live in 40 different apartments in this modest building. The building is economically diverse, though more than 60% of tenants surveyed make less than $35,000 a year. While rents are affordable relative to the neighborhood, many tenants were barely making ends meet, and many had fallen behind due to the pandemic and related layoffs.

Christopher Kim moved into Park Marconi in 2015, glad to find housing he could afford in a diverse and inclusive neighborhood like Mount Pleasant. A non-profit employee, Christopher, works in human resources of a professional membership society of oncologists and other health personnel dealing with cancer patients. With a passion for helping others and as a previous board member to other organizations, Mr. Kim did not know how his prior life experiences would come into play shortly.

In March of 2021, Christopher and all other Park Marconi tenants received a notice slid under their apartment door. A market-rate developer would purchase park Marconi, and tenants could move out in exchange for a $30,000 payment. The flyer contained complex language concerning only the sale of the building and nothing about the tenants and what to do next.  When tenants received the notice that their building was going up for sale – several tenants sprang into action.

One of the tenants in the building knew that in DC, tenants had the right to decide what happens to their building when it's for sale. This tenant had seen firsthand how some people try to deceive renters and deprive them of their rights by convincing them to sign paperwork agreeing to leave without guaranteeing they'll receive the money promised. Such tenant and several neighbors knocked on everyone's doors and encouraged them to come to an urgent meeting in the lobby of the building. Another tenant had worked with LEDC and received help with rental assistance and called to invite LEDC to attend the meeting.

At this first meeting, tenants shared their concerns and fears about the sale of the building. Bilingual Tenant Organizer, Lauren Taylor (LT), shared information about tenants' rights concerning the sale of the building. LT established that "under DC law, no one has to leave because a building is sold, leases in DC do not expire, and tenants have the right to purchase the building themselves or decide who purchases it." Together tenants decided to form a tenant association and protect their rights.

Unable to attend the meeting, Christopher was unaware of these tenant protections and was ready to move out of his building. Then he received a call from LEDC. With his previous experience living in other cities across the country, Chris mentions that "when a developer wants to purchase the building, you just move out." The call from Lauren Taylor was a welcome surprise.

With support from LEDC, tenants at Park Marconi formed a tenant association and elected a Board of Directors. Christopher Kim was elected as Secretary, though later became Vice President in September 2021, as the original President of the tenants association, moved out of the property. "I was happy to join the board … I had board experience in other areas, and I thought this was a good way to help support the property and the tenants," says Christopher.

With LT's guidance, Clara Lincoln, Bilingual Tenant Organizer, continued organizing and supporting the Park Marconi Tenants Association. She worked closely with Mr. Kim, the attorney, and the board to interview interested buyers, educate tenants about their options, and ultimately hold the final vote where tenants decided the future of their building.

"We would have meetings once or twice a month even during COVID…outside or inside when it got colder…we did a lot of door-knocking, a lot of flyers, a lot of calling. We just tried to make sure that everybody felt that their voice was heard…that they understood what was going on, that they had a voice, and an opportunity to decide as a whole, as a Tenants Association, what we were going to do with the sale of the building," Chris mentions.

In December 2021, the tenants voted to assign their TOPA rights to an affordable housing provider, offering tenants the right to stay in their unit long-term with a fully renovated building for the same or lower rent than they are currently paying.

Low-income tenants would also see substantial rent decreases and would be able to pay 30% of their income on rent. The affordable housing provider also offered a $30,000 buyout for tenants who wanted to leave the building, an unusual move that was necessary to compete with the initial offer. LEDC's Affordable Housing Preservation Program views this as a tremendous success – allowing all interested tenants to stay, maintain, or even lower rent levels for current tenants while completing full renovations to all apartment units.

At LEDC, we believe that part of the success of Park Marconi was thanks to Mr. Christopher Kim. He agreed to become the Vice President of the Tenant Association in August 2021 and got creative with the meetings held by the tenants during the pandemic. Thanks to him and the translation and interpretation support from LEDC’s Affordable Housing Preservation Program, Chris acknowledged all the unique needs of different families in the building. He consistently organized the tenants with the legal timeframe provided by the pro bono attorney and listened to his neighbors and their specific needs.

Looking towards the future, Christopher will be moving out of Park Marconi to a bigger apartment but staying in his beloved neighborhood of Mount Pleasant. He also recommends anyone in the same situation whose building is for sale reach out to an organization like LEDC. As LEDC can provide guidance and support in organizing a tenant association, finding an attorney, and ensuring tenants can make informed decisions about the future of their home. 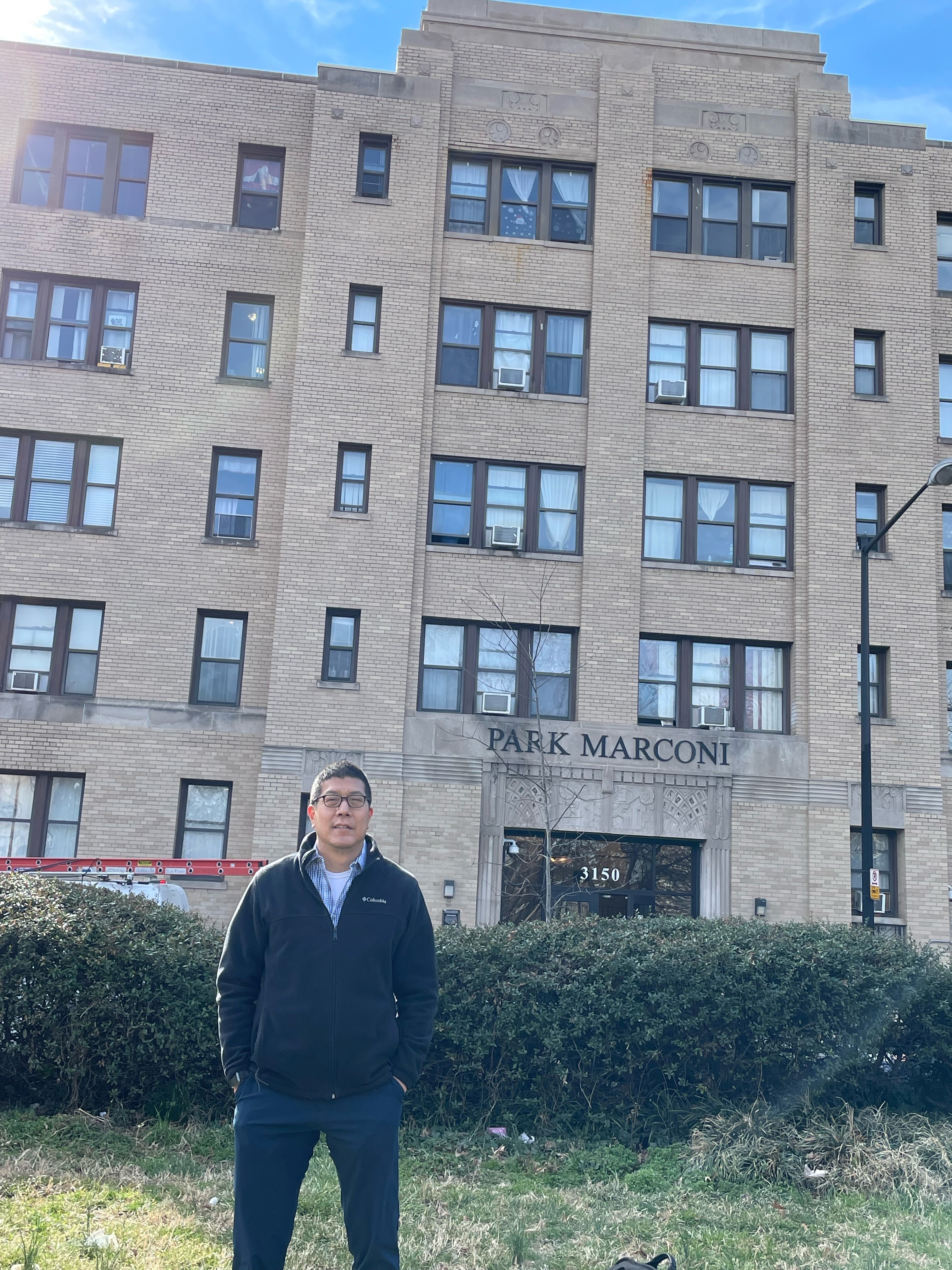