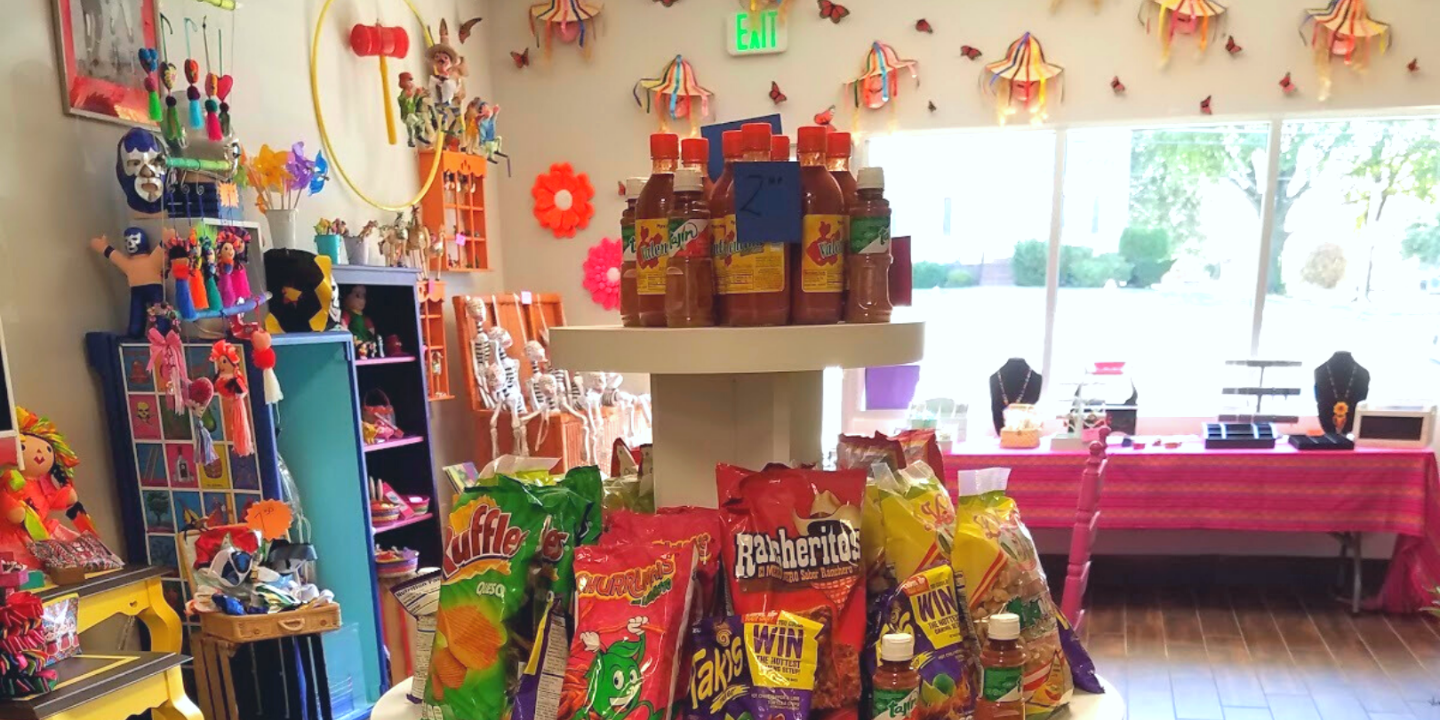 EWI Stories: "With love, from Mexico"

María Guadalupe López wanted to share her Mexican culture with her community. After completing the Entrepreneur Training for Success (ETS) program, María learned the entrepreneurial skills necessary to make her dream a reality. Apapacho, her store specializing in Mexican goods, opened in October 2019.

Empowered Women International (EWI) runs programs that help a diverse set of women in the Washington, DC area achieve their dreams of becoming entrepreneurs. Business ownership not only brings economic benefits but frequently serves other purposes like community education. María Guadalupe López decided to open a store that showcases her culture and allows herself to continually reconnect with her heritage. Her store, Apapacho, opened in October 2019.

Apapacho is located in Rosedale, Maryland, just outside of Baltimore. The store neighbors María’s family restaurant of fourteen years, Fiesta Mexicana. “Apapacho” means to give a hug to your soul in Spanish, and the store specializes in selling Mexican goods and the sharing of Mexican culture. She chose the location beside her family restaurant to gain more customers. 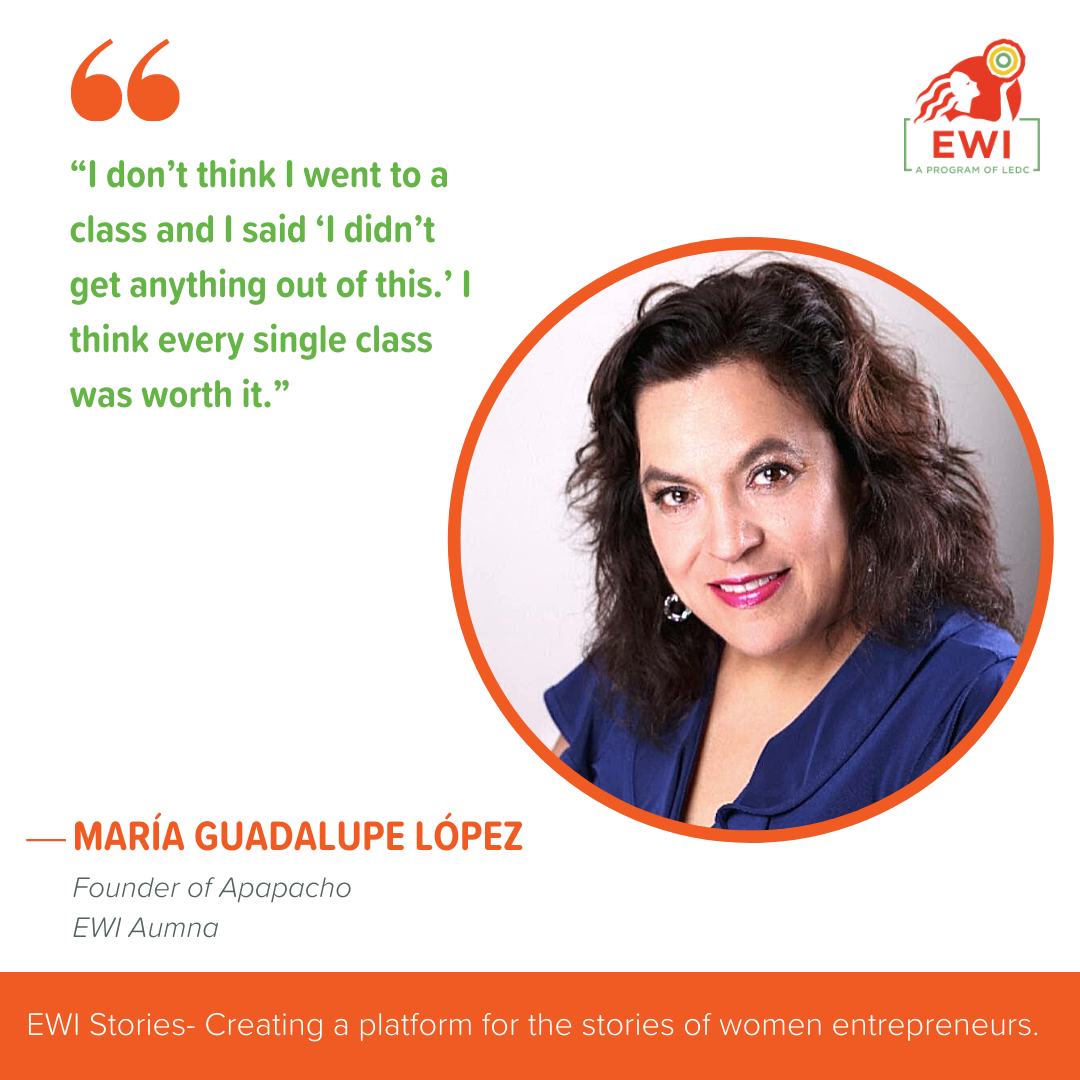 María learned about EWI when she was a client of the Latino Economic Development Center (LEDC). She had ideas for a business but did now know how to realize these ideas. María decided to join the Entrepreneur Training for Success (ETS) program to help her translate her ideas for Apapacho into reality. When looking back at her time in the program, María explains, “as the program was happening, we became clear of what we wanted to do.” A resident of Baltimore County, María traveled to Wheaton to attend her weekly ETS class. The class started at 7:00 pm, but María would leave her home around 4:30 to avoid traffic. She adds, “I don’t think I went to a class and I said ‘I didn’t get anything out of this.’ I think every single class was worth it.” As an ETS program participant, María learned a variety of entrepreneurial skills from marketing to pricing.

Originally from Mexico, María moved to the United States over 26 years ago. Her background is in education. Before opening her store, María taught English in Mexico, then became a Catholic school teacher in Baltimore for 18 years. She taught Spanish to students from kindergarten to middle school. One of her reasons for opening Apapacho was to promote and educate people about Mexican culture. As María explains, “ever since I came to [the United States] I have the obligation to share my culture especially because Mexicans have been labeled in the wrong way. I needed to show what Mexicans are about.” 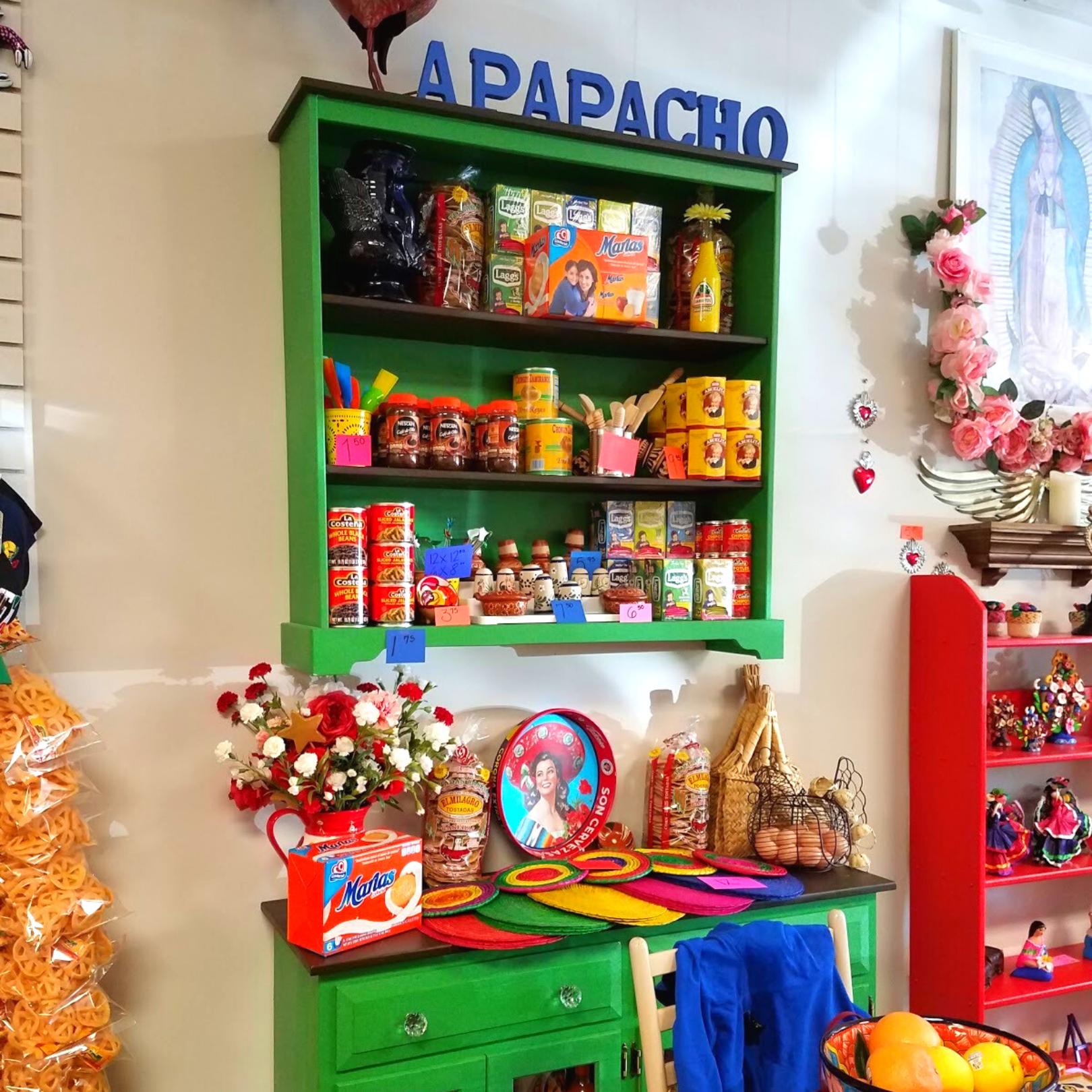 At Apapacho, María sells products like dolls and clay artifacts from Mexico. The store carries products from ten of the thirty-two Mexican States. She sometimes visits these regions to buy the products she carries. Each Mexican state has its own unique customs and materials to make products. María uses her education experience and loves to tell the stories behind the products to visitors - about where the products come from and the meanings behind them. Before COVID-19, Apapacho hosted monthly cultural events like game nights, arts and crafts, and women’s talks. These events made use of the store’s extra space to further her mission of promoting Mexican culture. 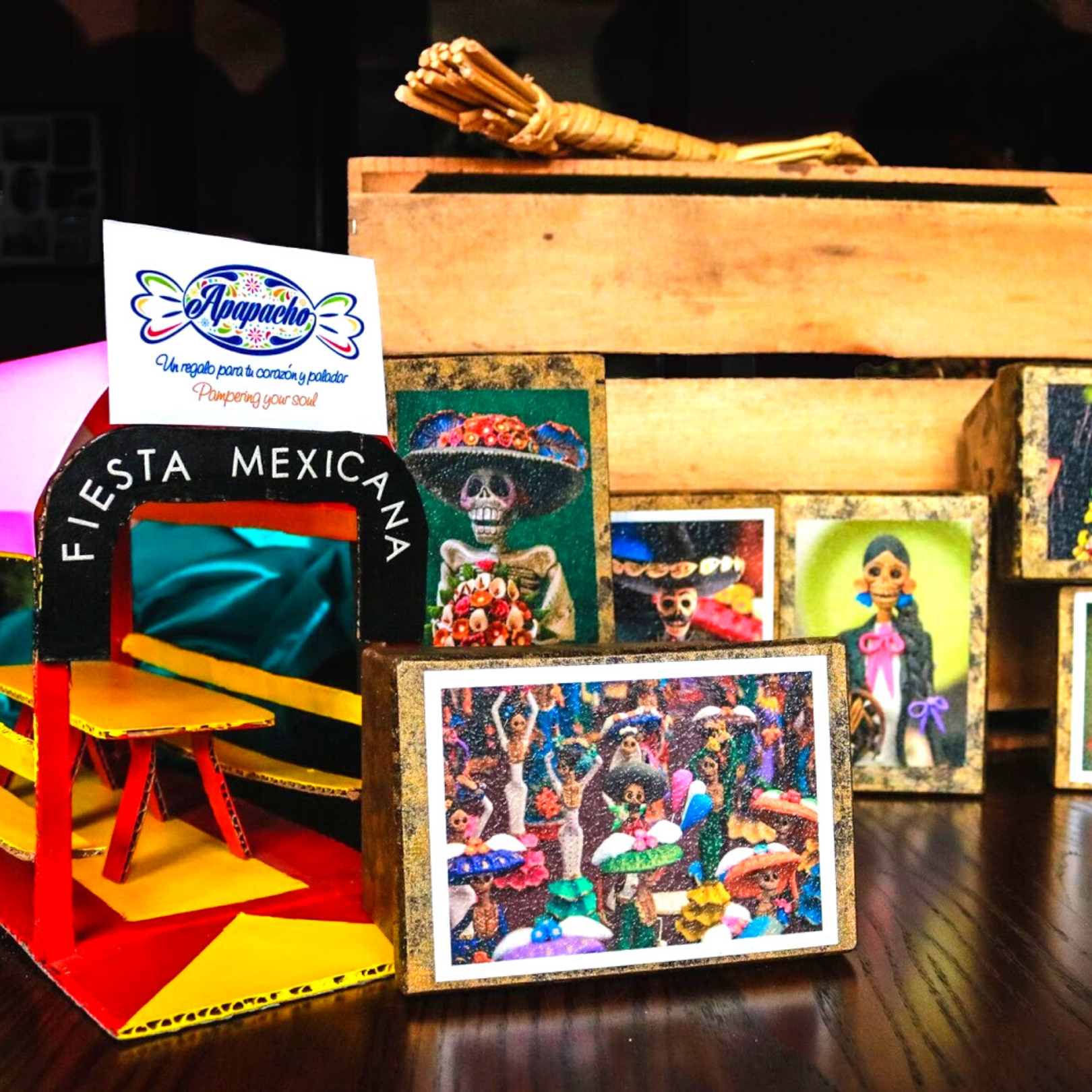 María wants everyone to feel welcome the moment they walk into her store. She shares an anecdote about an American family that visited her store and were excited by the Mexican wrestling masks. When they came in, they ran to the masks and took pictures with them. When María asked what was going on, the father explained that before the store opened, they had seen the masks and were excited for the store to open so they could buy some. On the interaction, María says, “I thought that was so cool that a whole family was waiting for my store to open to buy the masks.” It is important that Mexicans feel welcome too. She explains, “[Having Mexicans visit Apapacho] has been super rewarding. It has made me think that the work I have done has been worth it because I see their smiles and they warm my heart.” She adds that Mexicans have told her that the products she carries remind them of home. She expresses gratitude for the support she has received so far.

Nilufar Gylyjova, María’s ETS teacher, also visited her store and family restaurant. María says, “I think [Nilufar] is a blessing to everyone who happens to be in her class” María became good friends with Nilufar and some of the other program participants. One of her classmates is a photographer who took business portraits of her and her classmates. 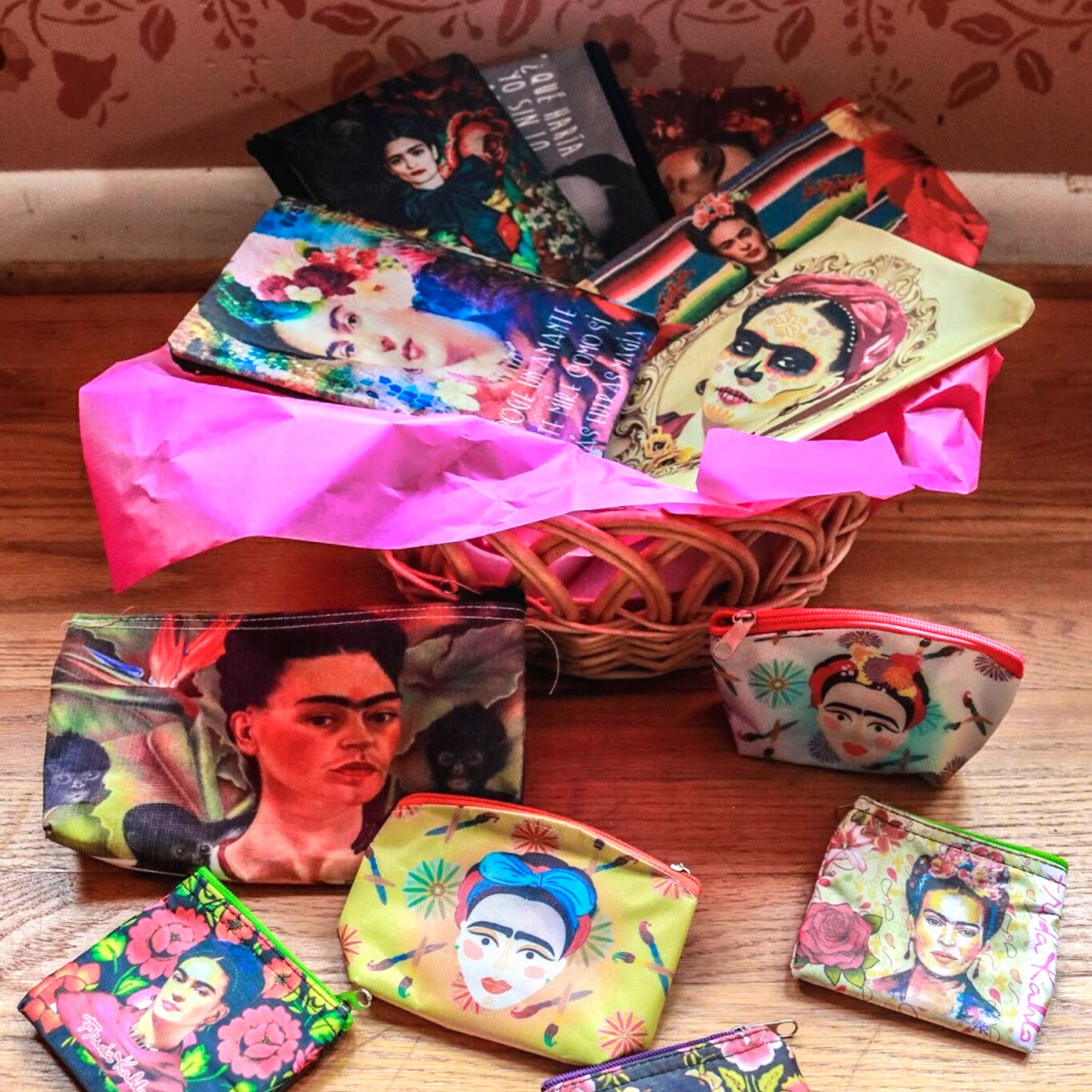 Thanks to ETS, María believes she is capable of operating her own business. “I think [ETS] gave me confidence and clarity on what I wanted to do,” María explains. She adds, “by showing the Mexican culture, I wanted to show the world how similar we are. We put lines to divide countries, speak different languages, and have different customs, but we are all humans. We are all the same. That was another goal I had [with Apapacho].” María plans to develop a website for Apapacho and learn more about marketing to keep growing her client base.